In the past, the idea of sport as a business wasn’t given much thought.

Both sport and business were separate entities, which held value in their own respective fields. Today, the two have become a unified and iconic pairing.

The mix has unveiled opportunities unlike ever before; creating new markets and flourishing investment, all the while safe-guarding and rising interest in traditional sports. Take the success of the London Olympics for example: per consultancy Oxford Economics, by the end of this year, the event will have contributed over £16.5 billion to Britain’s gross domestic product.

In fact, in the UK, the business of sport has exceeded over £20 billion a year in earnings and has supported the creation of over 480,000 jobs.

Certainly, the relationship between sport and business has transformed the world’s biggest sport stars into viable and extremely profitable brands: attaining world-class results, via world-class performance and interaction with fans across the globe.

Duly, sports sponsorship’s and partnerships are providing a deeper engagement with fans, beyond what is typical and traditional. 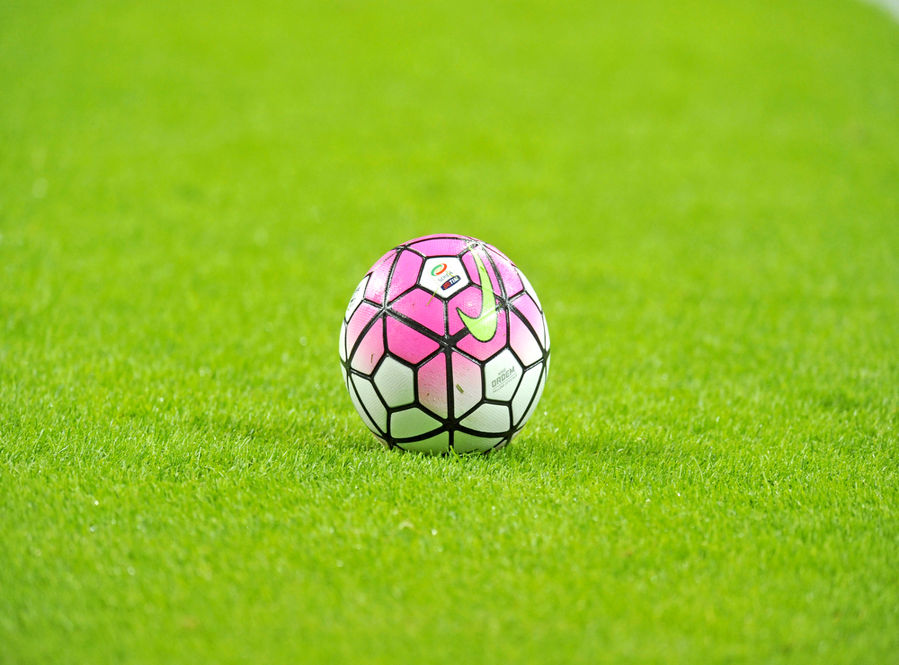 “The way that sports businesses are run nowadays is necessarily more transparent and professional, and more focused on the customer – the fan. Sport is entertainment and there is plenty of competition.”

It is recognition by business, that sport stars can play a key role in winning the hearts and minds of consumers. By engaging with fans on a personal, emotional level – sports sponsorship’s, and their chosen star at the forefront, can drive sales and increase market share; resulting in huge revenues.

Indeed, there has never been a more powerful, or effective tool in boosting the industry. One with an ability to reach – and connect with – millions of people around the world.

It also offers an opportunity for companies to make a long-lasting impression on their target audience, and gives brands the chance to engage new content with a connected and invested consumer – whether through traditional methods or non-traditional methods, such as social media.

The Role of Social Media in Sports Marketing

Today, we view sport in a very different way to years gone by – it’s no longer one dimensional, but multi-faceted. There is less inclination to crowd around a TV to watch a game, as viewing figures rapidly decline, sport enthusiasts – particularly of a young age – are seeking sporting-thrills through different mediums.

Just two months ago, a report claimed Sky’s live TV channels fell by 14% over the course of the 2016/17 Premier League season – despite the broadcaster paying around 83% more for the most recent deal.

The figures come from the Broadcasters Audience Research Board, which also revealed a 6% decline in total viewing figures during the same period.

Certainly, the underwhelming TV figures point to signs of a wider trend in how audiences are consuming live sport – with younger audiences increasingly favouring highlights on Snapchat over viewing a full game on TV.

A spokesman for Sky adds: “As we anticipated, the way customers engage with live sport is changing – with strong growth in newer, digital-first platforms.”

Fittingly, it has been reported 45% of people will turn to social media as a regular source of information, and that figure continues to rise, explaining where TV viewers are flocking to catch up on sports latest clips and scores.

How is the Sports Industry Meeting the Needs of its Dissipating Audience?

Critics may ask, is a role on social media really that effective in sports?

Taking Instagram as  one example, when Facebook paid £1 billion for Instagram and it’s 13 employees back in 2012, many thought the move to be misguided. But the photo-sharing site has been on fire since its launch in 2010; hosting more than 800 million active monthly users and 300 million daily users, who share approximately 95 million photos and videos every day.

The world-wide reach is almost incomprehensible and professional athletes look set to make the most of it. Subsequently, it is a fact that a large social media following will prove a huge benefit to endorsement partners.

Rob Mason goes on to add:

“Social media and the instant scrutiny that can provide means these trends should continue.

Most sports, whether for profit or not-for-profit, are run as businesses, and either way there is an imperative to keep moving forward.

To do that, you must keep improving your product, your customer service and being creative to keep your share of voice. It’s a self-perpetuating cycle.” 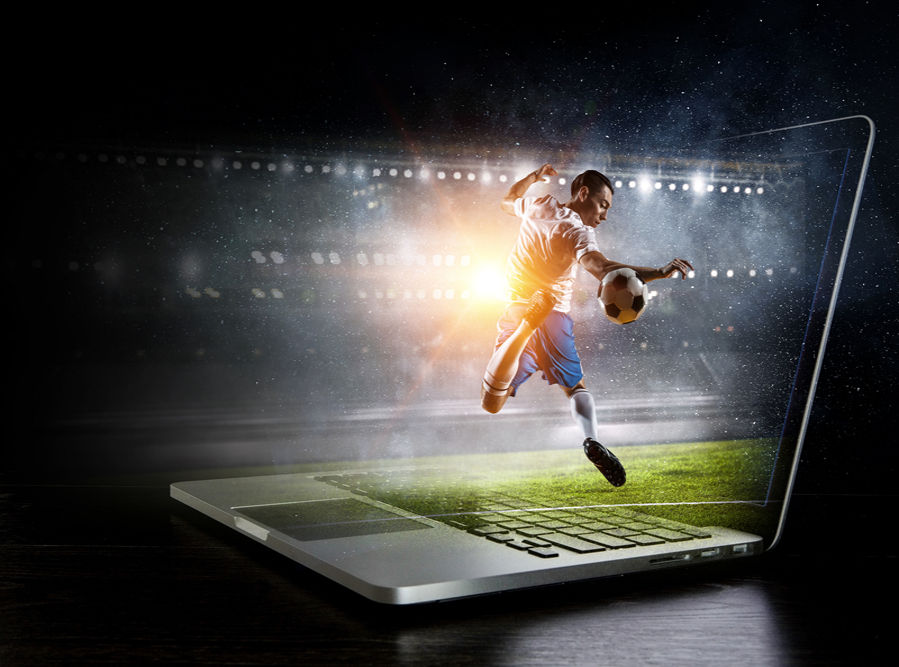 New data by Hookit (a site which tracks every athlete in sport) has revealed a ranking of athletes on social media, by total number of interactions – including likes, comments, shares and views.

Golfsupport.com decided to analyse the top ranking social media star in each sport, to determine which athletes are creating buzz for their brand and relative sponsors – all the while strengthening the world of sport as a highly lucrative business. 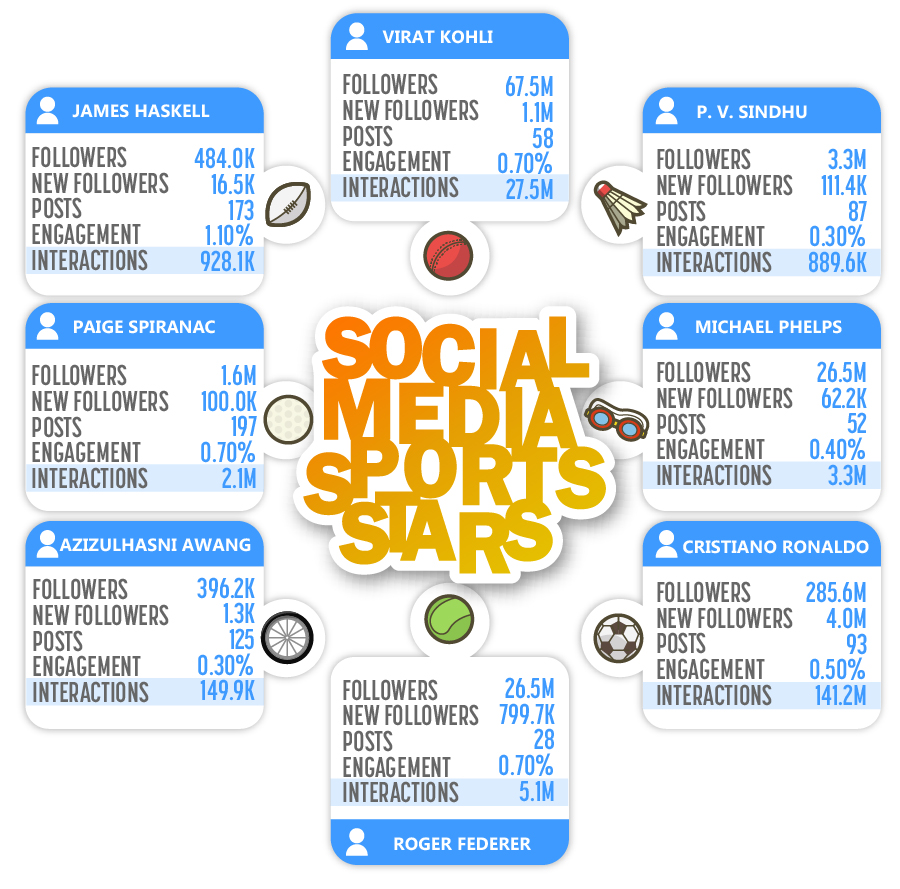 Certainly, Ronaldo’s value is a combination of heavy social media usage and the largest following of any athlete, totaling 285.6 million loyal followers.

As it is estimated Ronaldo’s sponsored posts have a value of $1.6 million each, for sponsor’s like Nike, Herbalife, Tag Heuer and Abbotts Lab, it is evident how valuable his participation with the brand truly is.

In fact, so confident in this were Nike that they inked a lifetime deal at the end of 2016 reportedly worth $1 billion.

For example, Virat Kohli has recently renewed his bat sponsorship deal with MRF for eight years and has also signed an endorsement deal with sports lifestyle brand Puma for a similar period – one of the biggest endorsements to be secured in his native country.

Meanwhile, Paige Spiranac has developed a huge social media fan base over the past year and mobile golf technology start-up 18Birdies hopes a good number of her followers are the Millennial golfers they’re targeting.

Spiranac signed with 18Birdies as a brand ambassador and will be used in a variety of marketing opportunities, including a national TV advertising campaign – a first for the professional.

“We are very excited to be working with Paige. She has built an influential reputation in the social media space and we are looking forward to bringing her unique content to our fans.”

Yet again proving a sports star’s social media presence to be a powerful thing; used to sell products, yes – but also to revitalise traditional sports and breathe new life into their existence.

Each respectively showcasing their sport on social media, and highlighting their personal brands and sponsorships, with seamless effort.