The most complete Tour ball: TaylorMade's path to distance over the past four years came initially with a 5-layer construction which is still the same to this day as they feel no improvements can be made. One area that saw significant improvement in 2019 was the new HFM - What is it? HFM (High Flex Material) is a new higher modulus material improving energy transfer through the ball generating increased speed. HFM acts like a spring, building up energy and when compressed it rebounds quicker to produce more speed.

Moving on to today...The new 2021 TaylorMade TP5 is set to be TaylorMade's most accomplished Tour Ball ever, the innovative five layer construction performs seamlessly with all your clubs. TaylorMade's engineers have spent considerable time devoted to the R&D (research and development) of the TP5 and with its Tri–Fast core and Dual Spin Cover, they believe they have found the ultimate Tour ball. New for the 2021 ball comes improved aerodynamics through its seamless Tour flight dimple pattern. Shallower dimples reduce drag during the climb of the ball, while steeper dimples maintain lift during descent for more drop and stop power.

The new Tri-Fast core is slightly larger and more reactive to further increase its already accomplished distance. The Tri–Fast Core is an exceptional feature, three layers have been combined with progressive compression to enable massive energy transference, in turn producing huge speed gains on fully committed shots. The contrasting premium soft urethane cover creates the perfect interface between ball cover and the grooves of the club. The new and improved TP5 Dual Spin Cover has been through rigorous testing to exude spin and accuracy around the greens and the feel from the putter head is exceptional as you would expect.

In relation to the TP5x: This TP5 version will spin slightly higher than the TP5x, have a slightly softer feel and show a slightly lower trajectory of flight in the irons compared to the TP5x. 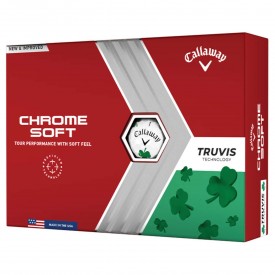