The Sports Parents Encourage Their Sons and Daughters to Partake in

Encouraging children to engage in regular physical activity is essential for their well-being and development. While schools offer physical education classes, parents are encouraged to make sure their children are participating in a healthy level of exercise outside of school as well. However, when the time comes for parents to choose what sport to encourage their child to play, their gender, whether you agree or not, determines a role when making that decision.

Recent figures from Gov.uk show that approximately 84% of children aged 5-10 have taken part in sports outside of school. The data collected assessed children who had participated in sports in a period of 4 weeks prior to the survey. Specialists from GolfSupport.com have analysed the report to find out if gender  plays a significant role when parents choose a sport for their son or daughter to play.

The most popular sport undertaken by children aged 5-10 was ‘swimming, diving, or lifesaving’, with around 50% participation in a period of 4 weeks. A breakdown of gender identified that there was an even number of boys and girls taking part in this activity with 51.5% boys and 50.2% girls enjoying swimming lessons. The second most popular sport outside of school was football (including five-a-side). Considering the prominence and reputation as a ‘manly sport’, it’s perhaps no surprise that 49% of parents would choose this sport for their sons, whilst only 12% of parents with daughters would opt to do football. And while this sport is well known for being male dominated, it’s perhaps sad to think there has been no change in narrowing the gender gap and eliminating gender stereotypes in football over the years.

Cycling or riding a bike is the third most popular sport activity outside school for children aged 5-10 and while the gender gap is not as significant as it is for football, it still shows that slightly more boys (35%), prefer this activity over girls (24%). Walking and hiking is next on the list, with both sexes enjoying this activity (boys 29%, girls 26%) pretty much equally.

However, when it comes to the gym, gymnastics, trampolining or climbing frames, this ranks as the fifth most popular form of sport among children aged 5-10 to participate in. Nonetheless, there is a whopping gap between boys and girls with 26% of girls enjoying these sports more, compared to just 13% of boys.

The results show that while gender debates remain a hot topic, parents are still quietly encouraging their children to do sports which are considered ‘appropriate’ to their gender. To add further weight to this issue, Golf Support conducted a survey asking 1,708 parents with children aged 5-10, which sport they would like their children to practice outside of school in 2018, based on their sex.

The results are as following:

The results convey which sports parents associate with their child’s gender, with some sports not included in the list for boys/or girls. Martial Arts and tennis are the only two sports featured in the top five for both sexes.

Mothers wish to satisfy gender roles more than fathers do

Interestingly, GolfSupport found that mothers are more likely to choose a stereotypical sport synonymous with their gender. Fathers chose more ‘masculine’ or ‘neutral’ sports for their daughters such as martial arts, netball or football, while the majority of mothers preferred dancing and gymnastics. In fact, when it comes to football, 86% of fathers chose football for their daughters, while only 14% of mothers chose the same.

Here are the results broken down by which sports are encouraged by mothers and fathers for their sons or daughters: 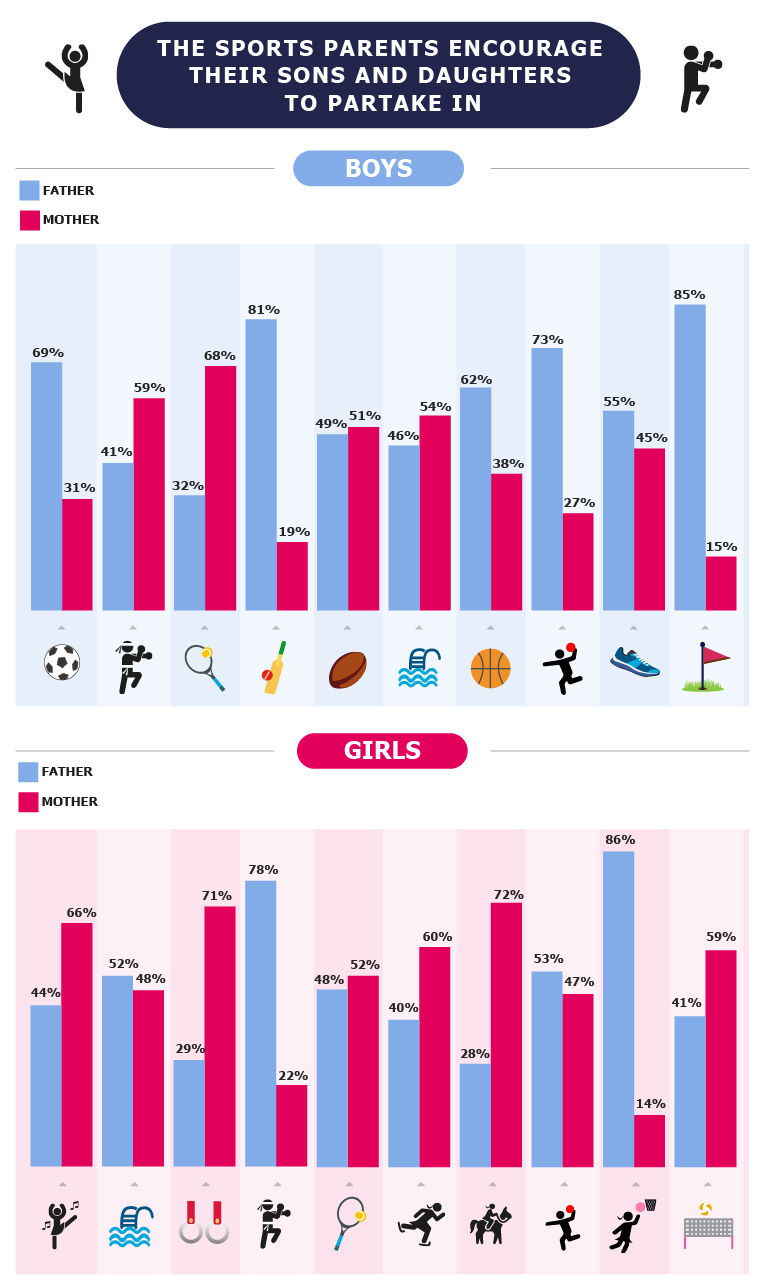 GolfSupport.com decided to reach out to dancing schools and football clubs, to understand the gender imbalance for some sports.

GolfSupport asked Football Magic Coaching, a club providing football coaching in London & Bromley regarding the ratio of boys to girls.

Simultaneously, GolfSupport.com reached out to Flamingos Dance, a dance school launched in 2009, offering ballet lessons and Zumba classes. Marilyn Barley, the owner and dance teacher believes that there are many elements of gender stereotypes that could be improved.

“I am keen to encourage boys to do ballet but I am afraid to say that I don’t see any noticeable increase in interest from parents of boys. On my current register I have 136 girls and 3 boys, so the girls outnumber the boys. Since I started teaching children in 2009, I have always had at least 1 boy enrolled, but the most I have ever had at any one time is 4. Though I am careful to keep the class gender neutral, class sizes are normally 10–12, so one boy may feel a bit outnumbered.  I currently have 2 boys in one small class of 5 which is promising and I hope to attract more boys via this group.’’

“I used to teach children’s flamenco classes which I anticipated would attract more boys but alas, over 7 years I never had one boy.  I have however, taught similar content to mixed sex groups within schools as part of the compulsory curriculum. When I do these workshops and at school, I find the boys equally enthusiastic to participate.  I guess this indicates that it is the parents who are not choosing dance for their boys.  I also teach adult dance fitness classes and have around 5% male attendees.”

”The importance of children engaging in an active life is undeniable, whether they are attending a physical education class, playing in the park or attending private classes, there are numerous positive aspects to playing a sport. As children are constantly growing, engaging in sports will contribute to a proper physical development, getting them used to maintaining a good posture and developing their motor skills. Furthermore, physical activity plays an important role in their mental development by engaging in social interaction, helping them understand the notion of fair-play, and teaching them to respect rules. In addition, playing a sport is a great way of combating depression and stress, as well as fighting against aggressive outbursts.”

”However, the infliction of gender stereotypes could only make the issue worse, as it seems most children would be more than happy to engage in sports considered ‘unsuitable’ for them from a gender point of view, before being told by their parents what sport they should choose.”