Actively playing and participating in sport can be highly beneficial to an individual’s physical as well as mental health. Despite this, an estimated 8.3 million men and 11.8 million women across the UK are categorised as ‘insufficiently active’ according to the British Heart Foundation. This is shocking, considering a lack of physical activity can significantly increase the risk of many adverse health conditions. With the consequences ranging from high blood pressure to heart disease, statistics show that regular physical activity can beneficially reduce the risk of early death by up to 30%. Similarly, with the yearly financial burden of physical inactivity an astronomical £1.2 billion on healthcare services, ‘Sport England’ believe continual sport participation can save between £1,750 – £6,900 per person in healthcare costs.

Interested in physical activity, GolfSupport.com analysed information from ‘London Datastore’ to reveal what percentage of the population (adults 16+) in each of London’s 32 boroughs does not play/participate in any sports at all. 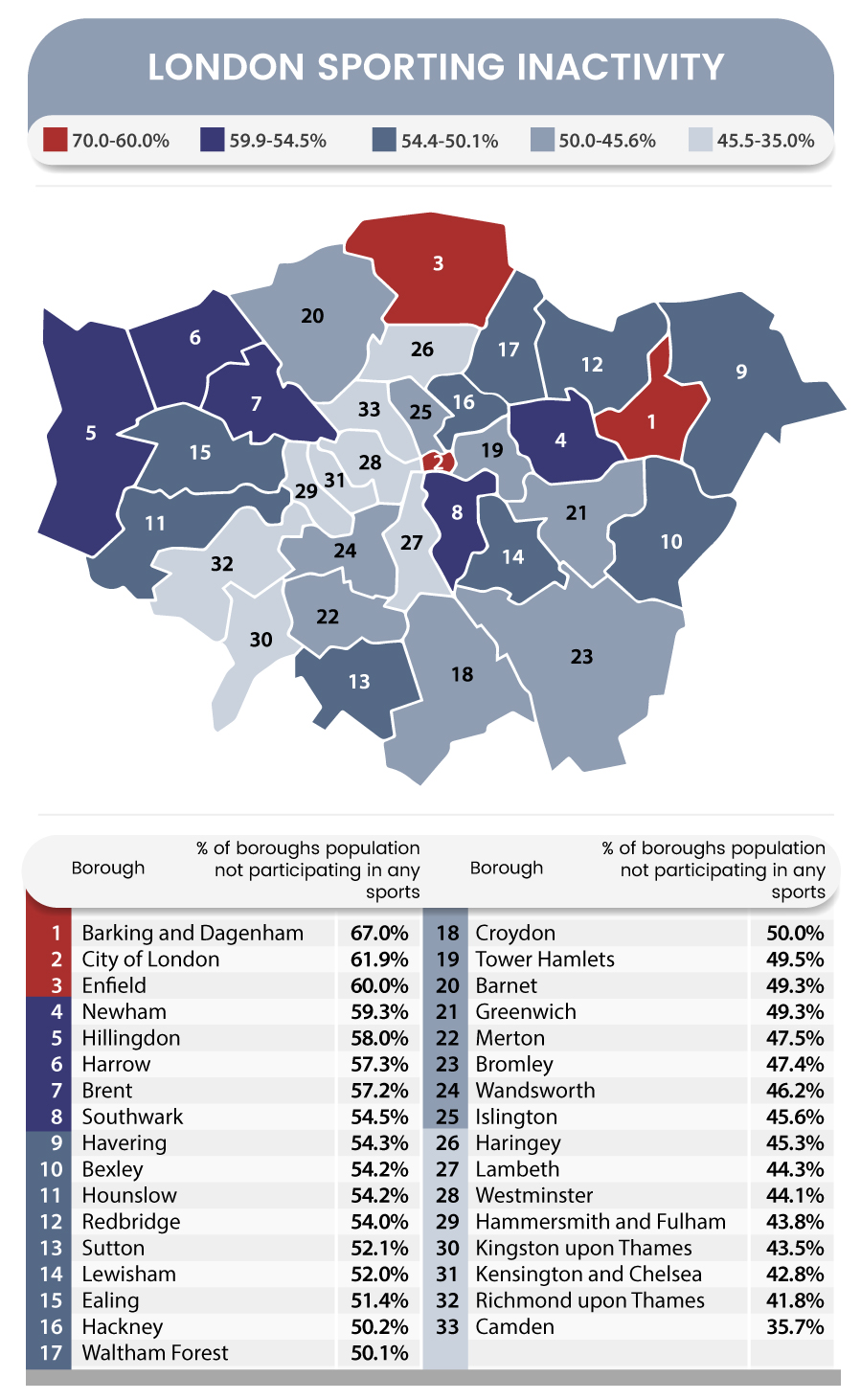 The research fascinatingly revealed 67% of Barking and Dagenham’s population does not participate in any sport whatsoever – the highest proportion out of London’s different boroughs. Barking and Dagenham was closely followed by the City of London, where 61.9% of residents do not part take in any sports. In third was Enfield, where 60% of the population does not undertake any sporting activities.

Interestingly, the London borough which primarily hosted the London 2012 Olympics, featured in the top five boroughs with the highest proportion of their respective populations not participating in any sports. It seems the legacy of the Olympics has not fuelled 59.3% of Newham’s population to try something new that will positively impact their physical health.

On the other end of the scale, it seems Camden is London’s most active borough with only 35.7% of residents not participating in any sports. Slightly above and less committed to being active, is Richmond upon Thames, where 41.8% of the population does not play any sport.

To gain an insight into why more Londoners are not actively engaging and participating in sports, GolfSupport.com also conducted their own survey. It found that ‘pre-occupied/busy with work’ was the most cited reason as to why Londoners are not playing sports at 32%. Other reasons ranked as following: ‘too tired’ – 24%, ‘have non-work-related commitments’ – 18%, ‘think sport clubs/venues/equipment is too expensive’ – 12%, ‘lack motivation’ – 8% and ‘don’t have a desire/want to play sports’ – 6%. 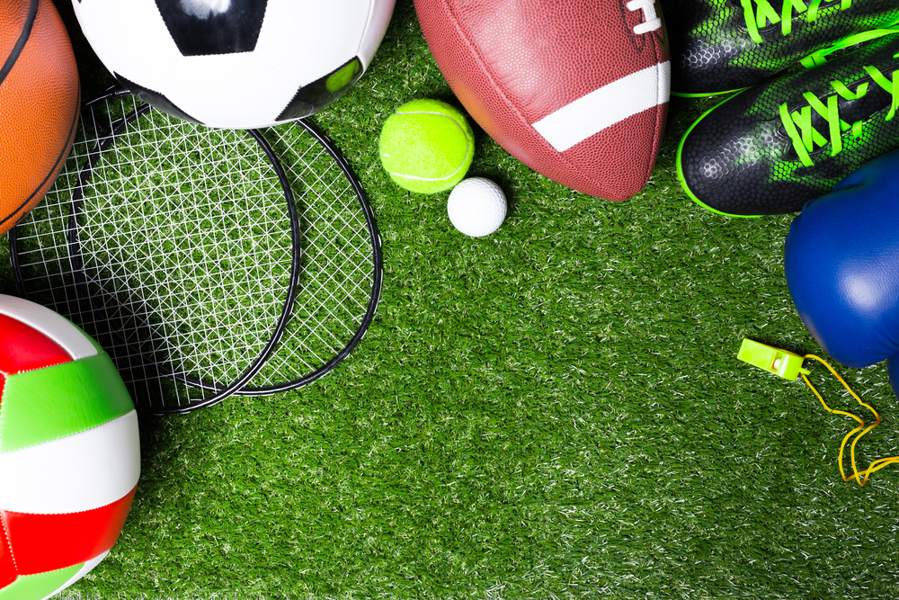 Why people should embrace sport to stay physical active:

Many people join a gym with the ambition to lose weight or stay fit. Whilst the initial commitment is there, over time the enthusiasm fades to the point where they are no longer going but still paying for membership. Sports could present itself a fun alternative. If an individual takes a liking to a certain sport then they will have a new-found motivation to be committed to achieving their fitness ambitions.

Sports provides individuals with the wonderful opportunity to meet and interact with people from all walks of life. Moreover, sports such as football also facilitate the environment for individuals to appreciate the importance of being dependable through taking calculated actions for the greater good of the team. The enhanced team working and social skills gained from playing sports will breed for job prospects.

Playing any sport can be the best method for working out muscles. When an individual plays a sport both their inner and outer muscles get toned. Overtime, this increases the endurance of the muscles. With respect to bones, their strength is defined by bone density. When an individual gets older, their bone density decreases, which can unfortunately result in osteoporosis. Sports therefore can assist in maintaining bone density and improving overall body strength.

Working eight hours a day can be very stressful, especially when an individual has a hefty workload and a ton of deadlines to meet. Playing a sport after a long day at work can provide the perfect stress-relief and give the individual something to look forward to. It also breaks away from the monotonic cycle of being sedentary throughout the working day – with much needed movement improving blood circulation and general mood. 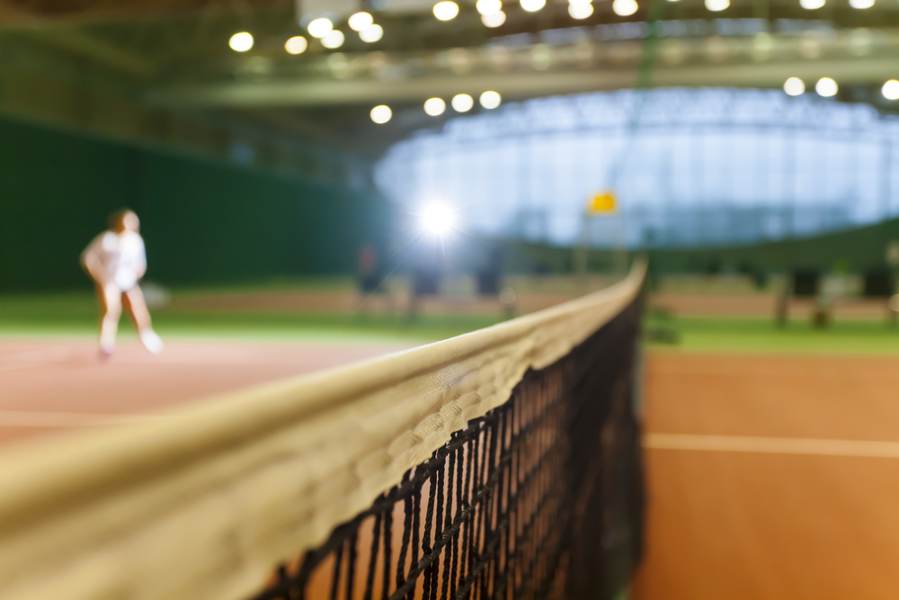 “I can’t say I have ever been a sporty person but the buzz which the Olympics created got me really engaged. I was particularly mesmerised by the hockey. Once the Olympics finished I did enquire about joining a few potential clubs but due to my working hours, I was unable to commit. Few of mates also had similar problems whereby the clubs they wanted to play their desired sport where either at full capacity or did not have any matches/training sessions which were available outside the usual working day. It’ disappointing. I personally think sporting venues/clubs need more funding to improve and expand their facilities, this will better enable them to service all demographics”.