How are Golf Clubs Encouraging More Women into Golf?

Despite the gradual progress to encourage more women into golf, they continue to remain an under-represented demographic. Figures from the ‘European Golf Association’ shockingly show that females only account for 16% of golf players when compared to 82% of males in UK and Ireland.

From the perspective of women, it seems the most significant obstacle is the financial impact of playing golf. When ‘Syngenta’ conducted a survey of 1,214 women to find out why they had given up golf after just two or three tries – the majority (37%) attributed it to the ‘overall cost of the game’. They also asked 654 female players who stopped playing golf why this was the case – 30% admitted to doing so because of the ‘overall cost of the game’.

With cost seemingly disrupting the participation of women in golf, golfing experts, GolfSupport.com reviewed a total of 215 golf clubs from 17 different towns and cities across England and Scotland, to see if they offered membership discounts specifically for women. 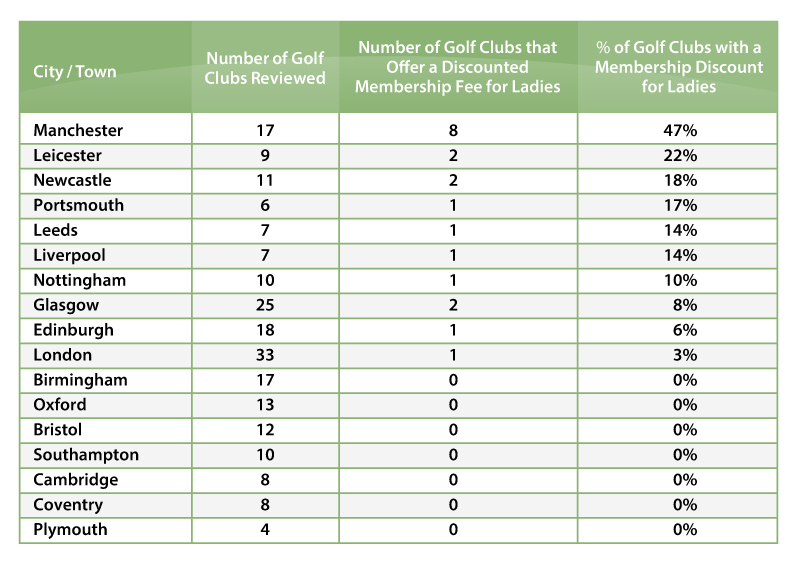 Interestingly, golf clubs located and reviewed in Birmingham, Oxford, Bristol, Southampton, Cambridge, Coventry and Plymouth did not have even one discounted membership type for women.

Overall, an overwhelming 91% of golf clubs from the 215 analysed do not have a discounted membership available for female golfers in their pricing structure.

“I started taking an interest in golf during my late-twenties when I was studying for a master’s degree at a university which occasionally offered an open-day at a local golf club. On the off chance, I went to try it out. To my surprise, I really enjoyed the patient nature of the sport and decided to join on a student membership. Once I graduated and moved back to Southampton, I wanted to continue with golf on a weekly basis, but the normal membership prices were out of my reach. I believe if golf clubs were to make a genuine effort to provide a sufficient discount on women’s membership fees, it would not only drastically increase women’s interest in the sport but make it financially more attainable to participate”.